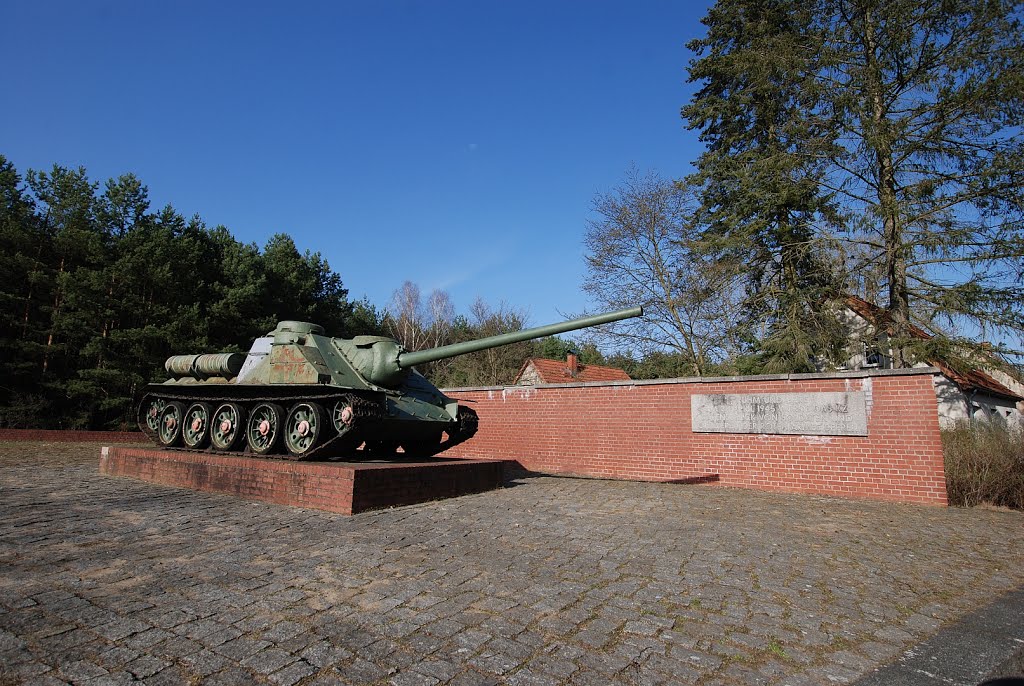 The day was cold as we drove north from Berlin about 90 km towards the Baltic Sea. Near our destination we passed a picturesque village turning into a wide lane marked on either side with what looked like poplar trees. Along the way Linden trees also appeared. As we approached my heart was pounding with thoughts of the atrocities that had taken place in the site we were about to tour. I had read Sara Helm’s book, Ravensbruck published in 2015 which was taken from survivors accounts, coupled with her methodical research that documented the existence of the only womens’ concentration/extermination camp in Hitler’s Nazi Germany.
Bene our driver slowed the car as we approached the camp. Visually the approach felt like we would suddenly come upon an old estate or a hunting lodge surrounded by forest. Heinrich Himmler had personally chosen this area as he had friends in the vicinity and his mistress Hedwig (Bunny) Potthast had set up housing nearby where she lived and bore two of his children. Himmler visited the area where he could stay with her and visit the camp at the same time. It has been said that he purposefully chose spots of beauty for the concentration camp sites. Instead of a picturesque lodge befitting the area our eyes abruptly were drawn to the left of the road as we came upon an old Soviet Tank standing in front of a brick wall designating Ravensbruck, the woman’s camp. We parked inside of the area and Greta our well informed guide walked us past the large sign and into the compound or large square where the daily apelplatz was held for endless hours in bitter cold sometimes for no reason, while the barefooted prisoners stood in cotton dresses. The most excruciating scene for me was the room that held the ovens where the bodies were cremated upon death or barely alive. I had forgotten my camera and waited for Bene to collect it for me. My friend and our guide had moved on and so had a group of young students. Bene handed me my camera and left the room, I returned to the scene with the two ovens along side one another. Originally there had been a third oven, now removed. I stood in front of two two used brick ovens which unfortunately reminded me of modern pizza ovens (I have seen used in America) where the bodies were burned at Ravensbruck. Wreaths of flowers had been placed on the devices that held the bodies and from the museum pictures I could imagine how high the emaciated bodies could be stacked into the fire. I stood for what seemed like a long time but was actually likely only several moments and prayed for peace for the souls who had died on this soil. My heart was broken.

I stood in shock. I stared in mediation as I viewed the memorial where the gas chambers had once stood. Near the crematorium a cauldron without a flame stood where once the spewn brown smoke emitted ashes and the putrid smell of burning flesh.
A strange shudder came over me and my body slowly began to shake and cough as though the chimney still released the horrible smoke of burning bodies. I am an empath and sometimes, this happens to me. I have been known to cough from the smoke on a theatre’s screen or bleed myself at the sight of blood. I centerd myself and let it go knowing that many souls had moved on beyond the death knell that hung in this sad place. Shortly the shaking stopped and I felt a sense of history, of tragedy and some peace at the beauty of the place with the lake nearby. To my horror I had read that the ashes from the crematorium drifted into and still lie at the bottom of the lake. They also carpeted the forest floor when the chimneys were working. The alley conveniently close to the ovens where prisoners were shot and killed, was narrow and high walled with no place to hide or duck. Death alley for the those who could no longer work. Walking outside I stopped a moment and stood taking in the serene beauty of the location, with Lake Schwedtsee close on the right, flanked by the Mecklenberg Forest to the rear, as my eye moved left the wind whipped around me and I saw beyond a space that had been the barracks for the female guards. Unseen from my view was the Youth camp behind the property.

Near the town of Furstenberg, the Havel River flows and from the camp, the spiral of the town’s church is visible. A place of such natural beauty, one could only imagine the starving prisoners besot with fear and stupefied at the slaughter they witnessed, the carnage, the physical and emotional pain they endured. Somehow the will to live survived and the dying scarred the landscape of the land  with every drop of life on this “blood soil.”

What I had expected to feel was the agony of death and pain and suffering. The memory was there, I felt it as my body began to shake with cold although it was about 50 degrees and not that chilly. The wind however whipped about me and it felt much colder against my heavy jacket. I began to cough, a dry cough that stayed with me the rest of my trip.

However, the work that the Germans have done to take responsibility, educate and mollify the German people, for such genocide of the masses has cleared some of the trauma of the grounds.

The sculpter of “Die Tragende”, by Will Lammert put up in 1957 is modeled after the Communist Jew Olga Benario Prestes who was an example to her fellow inmates for her courage and kindness . The memorial stands out on the property facing the village of Furstenberg across the lake. The electric fences are gone. The roses growing along the wall with memorials of each nation whose citizens have come to aid in the healing. We stood in disbeleif reading the names and countries that lost so many souls in the camp. tasted like salt and the earth felt like sand. They assumed they were closer to the sea than they actually were. Shortly, they smelled filth, rotting wounds, excrement and soon burning bodies.

After the camp was liberated in 1945 the Russian Red Army used the camp and destroyed most of the buildings, and created a working base. This too sent the souls onward.
Ravensbruck the only Nazi concentration camp built for woman opened in May 1939 and was designed to hold 3,000. By February 1945, it held 45,473 women. The camp held “asocials”, Gypsies, resistance fighters, Jehovah’s Witnesses, political enemies, prostitutes, the sick and disabled and the “mad.” Women arrived from Hungary and Poland, Holland, France, Britain and the “Red Army girls” from the Soviet Army to name of few of the countries.

Some healing of the site has certainly taken place. The energy I felt was one of relief and sanctuary now that the world knows what happened here and the evil that transpired. I was surprised at the calmness I experienced hearing and seeing exhibits of horrendous events. The medical experiments on the “rabbits” of Ravensbruck, where bone transplants and amputations were common, then infected with dirt and grime to see what would occur. The Nazi code word for being “gassed” was “Mittnerda”, and a meticulous count was kept of the executions.
However, the cruelty of the female guards, the inhumane treatment of the prisoners with beatings and Alsatian dog attacks were juxpositioned against the tiny gestures of humanity the prisoners showed for one another. Lovely presents made for friends are shown in the museum on the site. The treasures shown are beautiful and creative. One small doll made with human hair and bits of textile from the sewing area were as beautiful as any doll I have ever seen. How they hid and kept these gifts is a miracle in itself. Gifts of time and creativity were magnificent as were the sketches by outstanding artist’s resembled pen and ink (though I don’t know what they actually used to write with) and pages of poetry in tiny writing were found. The museum has an amazing display in contrast to the stark small cell some prisoners were housed in and made these objects so beautiful to behold in this dank harsh prison.

The woman were used as slave labor. Siemens Electric Company, the second largest electric company in the world today had a factory on site and nearby, rocket parts were made by the inmates.  In the sewing rooms the woman were commanded to make socks for the German soldiers on the front line and they were on display in the museum to show how the woman sabotaged the toes and heels of the socks so that they would immediately wear out and have to be darned continually causing agony to the soldier’s feet as they marched in the fields and lay in the trenches. This small rebellion cheered the woman on and helped keep them alive.

The day at Ravensbruck was soulful. Our guide took great pride in her knowledge and the choice she had made to be a guide. she wanted the world to know what had happened. Her mother too was active in keeping alive the horrific events of the Hitler regime.

My friend and I returned to our hotel in Berlin and walked into the night for a quiet dinner close to our hotel. We were emotionally spent, deep in thought, and grateful for our peaceful lives.

R.I.P. To all the Victims of of Ravensbruck.